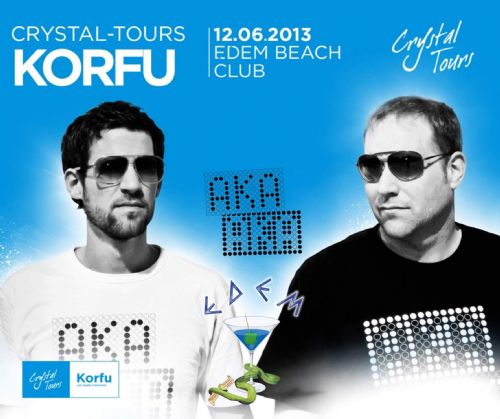 AKA AKA @ EDEM CLUB

Hannes & Holger met behind the decks in spring 2008 at one of those openair parties which start as a gathering of friends and overflow in a park-rave of thousand euphoric people. Since then Hannes & Holger concentrate their energies on their collaboration: AKA AKA. Under contract with Oliver Koletzki’s label Stil vor Talent, March 2009 saw their debut “Voegeln EP” released and supported by DJs like Dubfire, Claude VonStroke and Troy Pierce. Their track “Woody Woodpecker” stayed for one month on the Beatport minimal charts at place 1 and also the vinyl version hopped from 0 to 1 by release day on decks.de. In May 2010 it was awarded the with the 3rd place of the annual Beatport Music Awards in the category ‘best track minimal’. Also their 2nd and 3rd release on Stil vor Talent being played by Ellen Allien, Adam Byer, Sharam (Deep Dish), Gus Gus and many more became a huge success. In October 2009 they started their own label Burlesque Musique which focuses on on non-conform minimal and techhouse influenced by swing, jazz, balkan, funk and other energetic music. Besides Burlesque Musique they run the already since 2005 established music and party label Pentagonik.
Known for their driving liveact and DJset the two play in most of Berlin’s clubs like Arenaclub, Watergate, Maria, Tresor or Ritter Butzke. Travelling around Europe they already visited clubs in Amsterdam, Zurich, Madrid, Moscow, Turi and Vienna.
In March 2010 they played their first live performance at Watergate featuring their trumpeter Thalstroem who plays the trumpet and the Electronic Wind Instrument, which adds a new floating layer to their music. Together with Thalstroem AKA AKA produced their debut album which was released on the 30th of May 2011 on Burlesque Musique. It stayed on #1 of the amazon techno sales charts for weeks and was voted one of the top10 albums of 2011 by the readers of Germany’s Groove and Partysan magazine. They also received the “Best Liveact 2011” award at the Partysan Poll and were voted the 2nd best “Shooting Star 2011”. In the same year they asked 31 different producers to remix their album. In May 2012 the triple CD album “Varieté Remixed” was released which featured reinterpretations by names like Technasia, Moonbootica, Lexy & K-Paul, Marek Hemmann and Hanne & Lore. Also the remix album climbed up to #1 of the genre charts on amazon. Having remixed tracks by Oliver Schories, Turntablerocker, Thomas Schumacher und Lexy & K-Paul, they also appeared on the line ups of big festivals like Timewarp, Sea of Love, Sonnemondsterne, Mayday, Superrave and Nature One to name a few.

get it on iTunes: