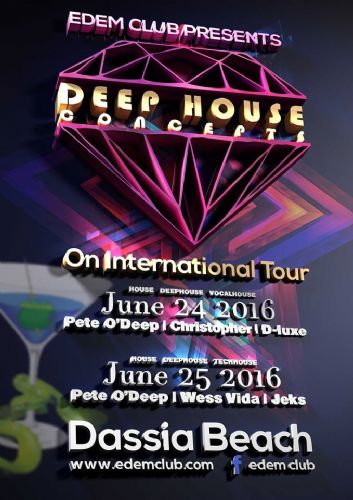 Wess Vida is been playing in the Belgium Dance Scene for some time now but then under a different alias DJ Wess, making some remixes together with Monolythe, a French Electro duo, change all that. Wess Vida was born as since then, the hunger for music is even bigger then before, making bookings abroad, in his region and across Belgium, Wess Vida keeps being busy producing his own tracks to be released this year. Along Deejay’ing and Producing, Wess Vida does also a lot of Networking because he believes the power of growth lies within the people he touches while playing gigs and the people who support him sideways during events and new oppertunities. Labeling and getting new chances to play across the globe is his motivation, this energetic young man loves to get a crowd nuts and dancing. Music is always going to be a part of his life, traveling and making music to connect with people is his way of living. There is noting that he doesn’t love within the music business.

Vinyl’s and cd’s are not strange to them, loves to play, Techno, Deep House, House, Tech House, Detroit, Indie, Minimal and of course the oldskool.

‘No fake stuff only the real deal, Wess Vida. See ya out there !’

Born in the 80s , grew up in the 90s… At the age of six he was given a three -stringed guitar gift and it soon became clear that music was going to be a big part of his life … Five years later, he learned to mix and quickly he played weekly in the youth… Vinyl was his school , good to criticize the manner and style of mixing his now ..

On the road from the UNDERGROUND to the MAIN, only the highest quality remain…

From FUNKY to VOCAL, and always something EMOTIONAL…

D-Luxe started spinning the decks at the age of 16 now at the age of 23 his love for music has grown the goal of his life. is to let people dance to the story he tells with musiche played at several clubs as : kings club, bocca, la rocca

” On the age of 17 this very skillful DJ already discovered the magic of mixing dancemusic. Any live performances later he discovered his real interest was to play quality, but still accessible afterclub music. Thanks to his extra presentation skills DJ CHRISTOPHER got the chance to broadcast weekly his own radioshow with this kind of music on the Belgian most famous radiostation “Topradio”.

Without any doubt CHRISTOPHER’s greatest quality is his enormous versatility in his DJ-sets. Beside the many bookings on quality parties (such as the big Retro House Party “Yoko Ono” in Ghent) and clubs like Insane, Insomnia, Cafe D’Anvers (level), Club Pazzo, Bocca (Deep House Concepts) CHRISTOPHER had not any problem to find also his way to commercial events (such as “Disco Dasco”), Dance festivals (“Loland Dance Festival”) and several dance bars (Ghent).

With this DJ you can already prepare yourself for more “Quality House” DJ-sets coming your way straight in the mix !!”

some bio stuff under here:

After swimming through different music styles such as hip-hop, break beat, progressive, house, detroit techno, funk, yes, even some 2step and drum ‘n bass, jeks created an eclectic style which he still uses from floor filling tunes to energetic sounds and climax building looping, everything to please a crowd. Jeks stands for a ‘minimaltec’ sound, mastering it all and not shy to make a live remix to build up the atmosphere. Straight on, other times surfing the trains of musical-trails, bashing up & echo-ing, he’s determined to keep floors moving on house, tech house & neotechno as guest performing at the most belgian leading & legendary clubs like cherrymoon, la rocca, decadance, the marquee, catacombes, the factory, ckomilfoo, café d’anvers, culture club … and international in edemclub, zoo club, … the list of events has become endless; cityparade, forest festival, soundgarden,… to even abroad on Full Moon parties.
the number of people who enjoyed, screamed & danced to Jeks music incountable thousands and still pleasing the people with modern sounds after being mentored by Olivier Pieters in the nineties & Mike Thompson in the beginning of the new century, Jeks rises on bills besides artists as Alex Flatner, Marco Carola, Butch, Redhead, Tom Hades, Tom Dazing & Gols, Tecnum, Fred Nasen, Trish, Psytox, Michael Forzza and many more which Jeks also appreciates & is inspired by like the ones above sets abroad [france, greece, spain,…] were reasons to keep on building up and were noticed by international events, clubs & promoters, providing more energy to spoil on worldwide dance floors.

Being a resident at club BarCode in Aalst [be] playing all nighters keeps ground with the local underground tech house techno scene. All love <3 for all those being supportive on BarCode’s dancefloor <3

Free promotional dj sets can be found under ‘bass’ as well as videos from performances as we reach into a new era, Jeks will be entertaining party people for over a seventien years which will be celebrated with productions on sound-quality-proof labels.

Next to being a musical artist, organising sunny events like k.m.a.s. – karma music afternoon sessions & uplifting co-founder of Forest Festival is what drives his support for the love of this scene. The 2day music festival was nominated best electronic festival in 2011 & 2013.

feel free to visit the website jeks.be for demo’s, agenda & contact information ask casual a free price-validation for your event. contact information can be found under the ‘drum’ section 🙂 packages including fee, travel & hotel reservation treated & taken care of by our professional agency.

but most important: enjoy life, enjoy the music !!

For that reason all productions of Jeks can be downloaded for free on this website only! Put them in your playlist, share them, enjoy them… !