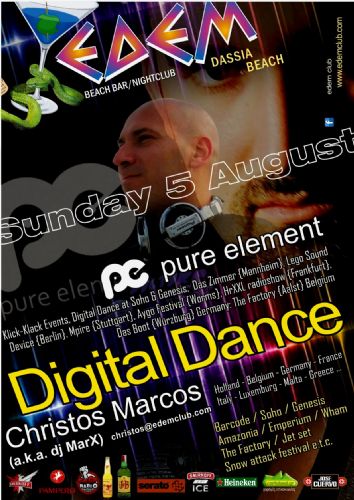 being first and foremost a dj,
pure element played in clubs and bars all around the country and
energized the crowds throughout the nations by fusing
electronic elements, live musicians and experimental vocalists.
today his sets cross and mix-up boundaries including soulful,
electro, minimal, tribal, deep and underground house.
his emotion-triggering performances now even elevate
the dancefloor of corfu (greece), making it an “international hotspot”.
since 2006 he has an annual residency there
and plays during the summer months @ club edem-dassia.
now 6 years on the roll, pure element is back again
@ club edem to represent the “digital dance” of all the good deejays
and producers of the world.
technique and clear rythm are the trademarks
which show off his charisma in clubs.
get ready for the future of electronic beats
and share this unforgettable night on this great island together with
djpureelement_
———————————————————————————————————————————————————————-
Christos Marcos (a.k.a. dj marX)  25 years Resident dj @ edemclub !!!