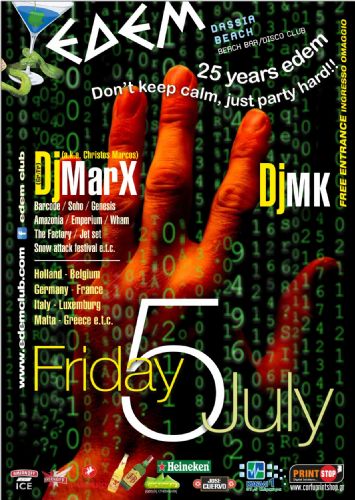 Christos Marcos (a.k.a. dj marX)  25 years Resident dj @ edemclub.Has been playing all around Europe at places like:

Christos builds up the music progressively, always keeping the contact with people to create a dancefloor fusion with extremely danceable sounds.

It all started @ the age of 6 with clasical music (the theory of music) , @ age 8 he started playing the French Horn , piano & madoline (he took part in alot various groups of music ,( simphonic orchestras , brass bands &…) In the years to come he started studying how to compose clasical music, and one brought the other he got involve in mixing varius electronic sounds in music college (N. Ireland)..Moving back to Greece and Corfu island , he started his Dj career , (in the start organizing partys with his friend & slowly , slowly started djing at famous clubs around Corfu)