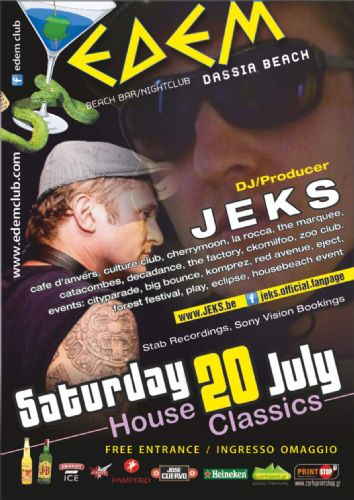 After swimming through different music styles such as hip-hop, break beat, progressive, house, detroit techno, funk, yes, even some 2step and drum ‘n bass, jeks created an eclectic style which he still uses.
from floor filling tunes to energetic sounds and climax building looping, everything to please a crowd. Jeks stands for a ‘minimaltec’ sound, mastering it all and not shy to make a live remix to build up the atmosphere. Straight on, other times surfing the trains of musical-trails, bashing up & echo-ing, he’s determined to keep floors moving on house, tech house, mnml & neotechno.
as guest performing at the most belgian leading clubs like cherrymoon, la rocca, the marquee, catacombes, decadance, the factory, ckomilfoo, cafe d’anvers, culture club … and international in edemclub, zoo club, … endless is the list of events; cityparade, big bounce, komprez, red avenue, eject, forest festival, play, eclipse, housebeach event… to name a few.
after being mentored by olivier pieters in the nineties & mike thompson in the beginning of the new century, Jeks rises on bills besides artists as marco carola, tom dazing & gols, tecnum, fred nasen, trish, redhead, tom hades, psytox, michael forzza and many more which jeks also appreciates & is inspired by like the ones above
sets abroad (france, greece, spain,…) were reasons to keep on building up and were noticed by international events, clubs & promoters, providing more energy to spoil on worldwide dance floors.
Jeks will be entertaining party people for over a decade now which will be celebrated with productions on for example stab recordings and other sound-quality-proof labels.
Next to being a musical artist, Jeks is co-founder of Forest Festival. A 2day music festival that was nominated best festival in 2011.
feel free to visit the website for demo’s, agenda & contact information