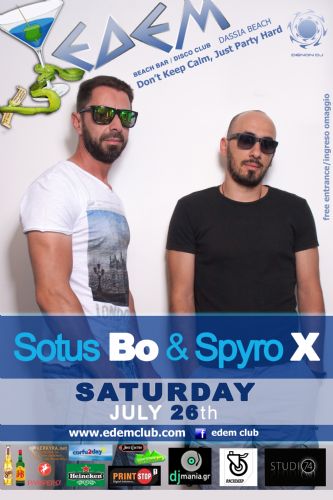 Sotiris Kalodikis, aka “Sotus Bo” earned his name quite early by Dj-ing in clubs while he was still in high school. Born on the island of Zante, Greece in 1979.
Sotus Bo has studied music production in London and has obtained diplomas by PointBlank College on music production, Steinberg and Native Instruments Training Centers , SAE Audio Engineering and BA Recording Arts.
His influences are mostly of electronic origin and his compositions mainly fall into 2 categories: Electronica [House Tech – House] and Ambient Downtempo.
His first recording appearance was made in 2006 with the “Mermaid “ track in Underground Lessons records, in the compilation “Collexion” and in Swift records with the “Chronicle of Sand” and “Dry land” in G.Pal/2 compilation.
He was involved with the post production of a short film called the “Chronicle of Sand” working on sound engineering and music editing through the Outline project. The “Chronicle of Sand” received the audience first choice award in Thessalonica disorder film festival, the second best film (student section) in Naoussa’s international film festival and was Greece’s official selection in biennial BJCEM Puglia 2008
His latest release as Outline came out in April 2008 in Soundtribe Records “The Outbreak EP”.
After 2008 “Sotus Bo” went solo as a Producer & Audio.
He Contributed on Mikael Delta’s Album “Tech Me AWAY” and performed as Live Act with Mikael Delta in 2010.
Nowadays Sotus Bo is recording his new tracks and he is also working full time in his recording studio as a sound audio engineer. He is the man behind the engineering of 2 tracks from the “Just Fine” duo that got quickly picked up by Paul Van Dyk himself for a collaboration track and he is also under:
YOUNG SOCIETY RECORDS / SYSTEM RECORDINGS / SOUNDTRIBE RECORDS /MUSASHI RECORDS / MOKILOK RECORDS / VANTAGE RECORDS.